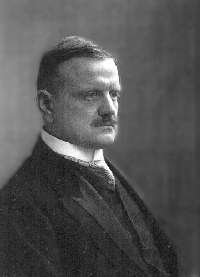 Loviisa was my ray of sunshine, my happiness, Tavastehus was the town where I went to school, Loviisa my freedom’, Jean Sibelius

In 1865, in the town of Hämeenlinna, situated in the south west of the central region of Finland, about one hundred kilometres from Helsinki with a population of 3,000; Doctor Christian Sibelius (1821-1868), a military doctor and surgeon, was a regular participant in the literary and musical activities of the city. As a young man he had studied in Porvoo and Helsinki. The 24 March 1852 he sang in the choir at the premier of the opera Kung Karls Jakt (The Hunt of King Charles) written by Pacius, in Helsinki.

During the Crimean War (1854-1855), he served in a naval squadron responsible for the protection of the country’s coastline. He was then transferred to Hämeenlinna, where he was also responsible for the civil population. From there he wrote to his mother Catherine Fredrika: ‘I suppose sooner or later I should settle down with a companion, because up to now life has not brought me very much happiness, but rather a feeling of emptiness’. In the autumn of 1861, he met Maria Charlotta Borg (1841-1897), who was the second of six surviving children of Gabriel Borg (1797-1855), a Lutheran pastor who had been previously a school headmaster, and his second wife Katarina Juliana, nee Hartman (1812-1892). The Borg's were music lovers: the father and grandfather (also a pastor) of Maria Charlotta had been amateur violinists, and she herself played the piano, which she was forced to give up later. In a letter dated 5 January 1862, to his younger sister Evelina, who lived and took care of her mother in Loviisa, Christian Gustaf wrote a flattering description of his fiancé, who had been presented to him during an evening dance given by Gustaf Euren, the head of the school : “She is sweet and at times really beautiful. She is as tall as me, which does not go against her, on the contrary she is magnificent. It is strange to see her beside our old mother, so small and so thin.’ As to his mother he had described her the 23 October 1861 as a ‘child of nature’. Twenty years earlier he had described to Runeberg what an ideal woman was to him: ‘Simple, natural with a childlike character.’ The wedding, celebrated by an uncle pastor of Maria Charlotta, took place the 7 March 1862. Christian Sibelius was forty one years old and quite corpulent, and she twenty one.  The couple rented a house from a local pharmacist in Residenssikatu (now Hallituskatu 11).

Three children were born, the first two in this house, Linda Maria (1863-1932), Johan Christian Julius, called Janne, the composer (1865-1857), the three names corresponded to those of an uncle, of the father and the maternal grandmother, and Christian, called Kitti (1869-1922). The name family Sibelius was relatively recent, as the great-grandfather of the doctor (the great-great-grandfather of the composer) was called Martti Martinpoika (Marrti the son of Martin, in Swedish Matts Martenson). In the middle of the eighteenth century he had left his native district of Artjärvi, where his ancestors had lived since the sixteenth century, and went to live further south, in the village of Lapinjärvi. The son of Martti, Johan (1759-1820), after living with his father-in-law not far from Lapinjärvi, had taken the name of the farm they were to work together: Sibbe. Then in the next generation, that of the grandfather of the composer, also named Johan and second of ten children, Sibbe became Sibelius.

Johan Christian Julius Sibelius was born the 8 December 1885. His grandfather Johan Sibbe-Sibelius spoke no Finnish, though the paternal line had been mostly Finnish, whilst on his mother's side had Finnish, Swedish and even German roots and were exclusively Swedish speaking with Swedish traditions and customs. His father Doctor Christian Gustav Sibelius, died the 7 July 1868 at the age of forty seven, victim of his dedication during an epidemic of typhus caused by a terrible famine, eight months before the birth of his second son, baptised Christian in his memory. The Doctor had been a singer, pianist and amateur guitarist, he had lived in an extravagant fashion, well above his means, leading a rather bohemian and contracting heavy debts to satisfy his love of hunting, cigars, cognac and books. Extravagantly he had rent a pianoforte at great cost. Maria Charlotta was left with the meagre pension of a widow. To reimburse the debts of the doctor, totalling at around 4,500 marks, or more than two years of his salary, his household goods were auctioned off. A widow at the age of twenty seven Maria Charlotta returned to her mother Katarina Juliana, who was herself a widow since 1855, owner of a small house on the banks of Lake Prykikatu, now Palokunnankatu. There Maria Charlotta found her two unmarried sisters, Tekla, a hypochondriac (1839-1912), and Juliana the ‘nanny’ (1850-1909), who taught the piano, as well as a brother Axel Gabriel (1845-1903). Two other brothers, Oskar Fredrik (1847-1907) and Otto Rudolf (1850-1898), were already independent. On the maternal side, Janne had two aunts and three uncles. Juliana and Otto were twins, and all the three uncles were to make their careers in teaching, Alex Gabriel at Mikkeli, Oskar Fredrik at Turku and Otto Rudolf at Tampere.

Deprived of their father and grandfathers, Janne, his elder sister and younger brother were brought-up in a world of women, essentially by their mother and their maternal grandmother Katerina Juliana, nee Hartman, (1812-1892) in her home. Excessively religious and especially since the death of her husband, Mria Charlotta had a tendency to withdraw into herself and to be alone. She never signed the letters to her son ‘Mother’ or ‘Mum’ but ‘Maria’: with one exception written before her death in 1887, signed ‘Your mother Maria’. In one of these letters, she demanded of Janne to tell her everything he did, except what he could tell to nobody: ‘It is only to God that one should reveal all one’s thoughts!’ Janne felt less close to her than to his Uncle Pehr and Aunt Evelina, who found his sister-in-law pessimistic. One of Maria Charlotta's sisters and one of her brothers – Juliana, a piano teacher in Hämeenlinna, and Otto a maths and natural science teacher in Tampera  – suffered from ‘nervous troubles’ and his daughter Linda, the eldest sister of Janne, suffered from depression from about the age of forty: she spent her life in solitude before ending up in different clinics. Widow of a pastor, Katerina Juliana Borg, nee Hartman, was on the contrary, according to her grandson Janne, an iron willed woman, tempered however by a solid sense of humour.

Sibelius's childhood that was not without difficulties and marked by the death of his father, but without this succession of psychological and family dramas he found substitutes for a father in Uncle Pehr, and a substitute for a mother in the person of his Aunt Evelina. His summer holidays were at Loviisa at his paternal grandmother Catherina Fredrika, or at his Uncle Pehr in Turku. In May 1877, on the way to Loviisa, the Sibelius family passed through Porvo a few days after the burial of Runeberg a left a wreath on his tomb, a gesture that greatly impressed the then twelve year old Janne. ‘Loviisa was my ray of sunshine, my happiness, Tavastehus was the town where I went to school, Loviisa my freedom’, Sibelius told his biographer Karl Ekman junior (1895-1961). Janne soon turned out to be more sensible but also more secret than most of his friends. From 1871 he went to a Swedish primary school whose headmistress Eva Savonius was a friend of the family, then for one year (1875-1876) to an establishment where the teaching was in Finnish, with a teacher who was to become a renowned pedagogue, Lucina Hagman. Janne announced that when he grew up he would marry her! In 1876 he entered the Finnish grammar school in Hämeenlinna, opened three years previously, one of the first set up in the country and one of the best. To be educated in such an establishment was rare for a child whose maternal language was Swedish. Janne continued his studies until 1885. He struggled for the first time with the Kalevala and studied Latin, Greek, Russian, German (from (18879) and French (from 1881). He never mastered Finnish to the same degree as Swedish, but his good knowledge of each and his non-implication in the linguistic quarrels that divided the country more than once, contributed to make him from the start a symbol of national and moral unity.

Janne commenced piano lessons at the age of nine under the severe eye of Aunt Juliana. He is said to have improvised on the piano The Life of Aunt Evelina in Music: though no trace of this exists today. In October 1875 after having attended a concert in Hämeenlinna given by the Swedish harpist Adolf Sjöden, he played from memory on the piano several extracts of the pieces he had heard, amongst which Haendel’s concerto. His oldest composition, Vattendroppar (Water Drops) JS 216, in E minor for violin and cello pizzicato was saved by his first biographer Erik Furuhjelm, may have dated from that year.