he Promised Land lay at the meeting point of the tectonic plates of the great civilizations of the ancient world. There were four great civilisations: Egypt, Assyria, Mesopotamia and the Hittites, each of these had its great king. What is interesting about the Hittites is their almost sudden disappearance from history, in an extremely short period of time, a few short decades towards the latter part of the second millennium BC, leaving behind them the ruins of their capital Hattusa in the arid centre of Anatolia hundreds of kilometres from the Mediterranean.

The capital of the great king was capable of resisting any attack, its walls six kilometres long, up to eight metres thick with towers up to thirty metres high. Hattusa had a capital of 50,000 persons, a vast royal palace and a vast temple with two hundreds halls and rooms with dozens of large public buildings. 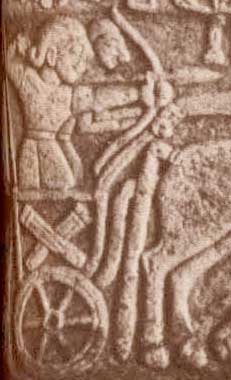 Archaeologists found the ancient library of Hattusa with thirty thousand cuneiform tablets, archived and classified in perfect order, the greatest ancient library ever discovered. The language was totally unknown to the world of archaeology, even though cuneiform was of common use in those times by the Assyrians, Babylonians and Persians in writing their languages.

The language of the Hittites deciphered by a Czech was astonishing in that it resembled no other Middle Eastern language, but belonged to the Indo-European family of languages. The tablets told of a civilization built on duty, discipline and sacrifice, and a vengeful god who could inflict terrible punishment to those who did not respect the iron discipline of the king and empire. The powerful army built an Empire that stretch from the Aegean down to the frontiers of Egypt, which was then just to the north of what is modern day Israel.

In 1279, Ramses II reigned over Egypt, his empire met with that of the Hittites near the ancient city of Kadesh close to the borders of present day Syria and the Lebanon.  It was here the greatest battle the world had ever known until that time, the Battle of Kadesh, where the chariots of the Hittites carrying three warriors, of a superior design to those of the Egyptians that carried two, clashed in a terrible battle. History recorded the victory of Ramses II, but the library in the ruins of Hattusa uncovered the peace treaty signed between the two great kings, which showed that the Hittites had imposed their forces over the Egyptians pushing the frontier of their empire hundreds of kilometres south into today's Israel, thus becoming the greatest empire of the ancient world. Later a permanent peace treaty was concluded between Ramses II and the Hittite King Hattusilis III.

A few short decades later the Hittites disappeared from history for unexplained reasons, until a new discovery was made by modern archaeologists in their excavations at Hattusa. A series of indecipherable hieroglyphs were discovered in an underground area, after much research this were finally translated telling how the winner of the Battle of Kadesh and the great king launched themselves into a fratricidal war. Hattusa was destroyed, designed to resist an external enemy it could be defended by an enemy from inside.

The archaeologist discovered the palace and temples had been burnt down, but not in war, they concluded the city had been abandoned, the population taking with them everything that could be carried. The city had been evacuated. Where they went is a mystery, but in any case the Hittites disappeared forever from history, victims of their own cupidity.

The lesson of this story is its comparison with biblical Jerusalem. Hattusa was the centre of a great empire, its vestiges are still visible today after more than three thousand years. Not a stone remains to confirm the existence of the biblical empire of Solomon and David, which according to the Bible was in its making at the time the Egyptians battled with the Hittites at Kadesh.

go back to previous page